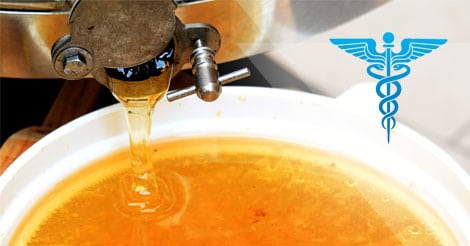 Honey has been widely known for its therapeutic benefits. An article from the US National Center for Biotechnology Information (NCBI), the site for the US National Library of Medicine, National Institutes of Health, says honey has some 200 healthy substances, primarily composed of glucose and fructose. But most importantly, it is reported to contain 4 to 5% fructooligosaccharides (FOS), which is a natural sweetener. FOS is a healthier alternative sweetener with reduced calories and it is actually a probiotic agent.

A study also shows that honey has lots of amino acids plus minerals, vitamins, and enzymes. But its contents really depend on what plants are present in the area where bees feed. But generally, natural honey contains antioxidants that boost the immune system against infections and feed body cells. Examples are phenolic acids, flavonoids, quercetin, and reduced glutathione, to name some. They work together for an antioxidant synergistic (combined) health effect.

However, modern medicine actually uses it sparingly for therapy or treatment for lack of substantial scientific support. But some sectors feel that the empirical (observed) evidences are undeniable. For decades, it has been noted that honey has been effective for remedying cardiovascular, liver, and gastrointestinal problems.

Some decades ago, honey was tested in labs and clinics by some research groups. One finding was its antibacterial property which has also been discussed in other studies. Natural honey is said to fight off harmful organisms, such as Salmonella and Helicobacter pylori, wh+ich harm the digestive system.

Tested with a model of colitis (an inflammation sickness), honey was shown to be as useful as the prednisolone treatment, which is a medical treatment. A study also showed that honey has anti-inflammatory properties and immune system that benefit wounds.

Al-Waili and Boni (2003) showed the anti-inflammatory benefit of honey after taking it. It has also been shown to help prevent increase in bad cholesterol or LDL levels. It has good effects in an investigational bladder cancer as well.

Aside from glucose and fructose, what make honey sweet are disaccharides.

The main enzyme in honey is responsible for forming honey. It also provides antimicrobial benefits and helps you with calcium absorption.

The color of genuine natural honey varies, depending on the botanical source, storage conditions, climate and temperature, and age. How transparent it depends on the residue like pollen. Honey can also crystallize and turn sugar depending on the glucose content. Some folks think honey that crystallizes is fake. But the fact is, natural genuine honey does have sugar (glucose) and will crystallize sooner or later.

Be careful in buying honey, there are lots of fake honey brands being sold everywhere. To help you identify if it is real or not, here are easy ways of testing pure honey.

Why is Honey Good for Your Kids?